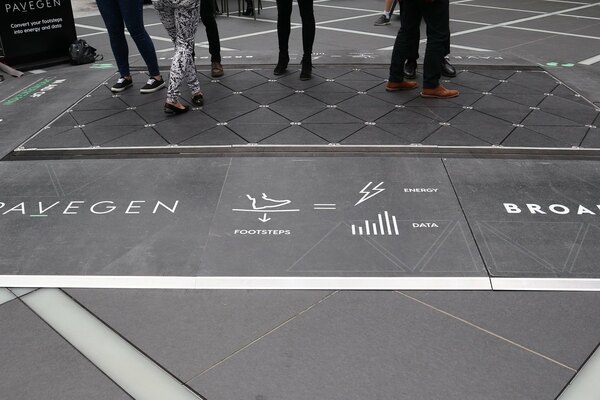 We have received a £5,000 donation from two London companies following an innovative fundraising initiative.

Designed to enable people to make a positive change in their city, the walkway was installed in Finsbury Avenue Square from Tuesday 28 - Friday 31 May. The 30,000 steps target set by Pavegen was reached by the Friday evening, leading to a generous donation of £5,000 to Providence Row.

Tom O’Connor, our Chief Executive, said: “We are very grateful to Broadgate and Pavegen for their generous donation. A number of our services such as trainee schemes, language classes and employment support rely entirely on donations. Last year more than 1,600 people used our services, so it is absolutely vital that we continue to raise funds.”

The contribution will prove instrumental in delivering further support to our service users. Five thousand pounds will enable two of our trainees to gain a nationally recognised accreditation to help them move into employment.

David Lockyer, Head of Broadgate, said: “At Broadgate we are keen to champion innovation, which is why we were delighted to give Pavegen the opportunity to showcase their flooring system in the heart of our neighbourhood. The fact that we could do so whilst raising much needed funds for Providence Row in our local community made this project unmissable.”

Providence Row, which was founded in 1860, seeks to tackle the root causes of homelessness to help people get off and stay off the streets. We are one of the only charities in London which actively engages clients in training and employment, independently of their support needs and experience levels.

Laurence Kemball-Cook, founder and CEO of Pavegen, said: “We’re helping to build cities that work for people rather than machines. It’s great to support Broadgate and Providence Row’s work with the homeless because a truly smart city works for everyone, from high-earners in finance to those unlucky enough not to have a home.”

Providence Row is based in Tower Hamlets, which is one of the most deprived boroughs in the country, but also next to the wealthiest square mile in the world. In 2018, Tower Hamlets had the lowest life expectancy and the highest rate of heart disease of all London boroughs along with Newham.