Outreach: Being there | Providence Row Skip to title Skip to main content
We gather anonymised analytics data on website usage unless you opt out.
OK Opt out 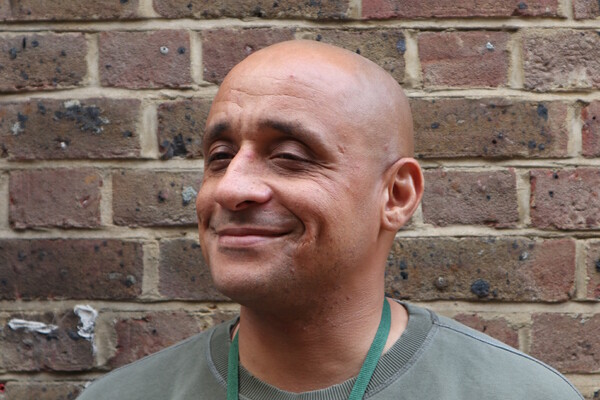 Reaching and supporting the most vulnerable people on the streets.
10 Oct 2019

Many people know of our work from within our thriving Dellow Day Centre, just off Brick Lane, but did you know we also do a lot of street outreach?

Outreach is going into the community to work with people who are homeless and entrenched in addiction. Deaths of homeless people increased by 22% to 726 in 2018- the largest rise since 2013, according to the Office
of National Statistics (ONS). Two in five of the deaths were related to drug poisoning – an increase of 55% on 2017.

To mark Homeless Action Week and World Homeless Day on October 10th, we wanted to draw attention to those who, every day, reach out to some of the most vulnerable people in our communities.

We spoke to Delroy, one of our Outreach workers. Every day Delroy goes into the streets of Tower Hamlets to try and engage with people, help them transition off the streets and out of addiction by connecting them with vital services support.

Delroy, could you describe what outreach is?

In the work I do, there isn’t an average day. I go to different hotspots, places known to be frequented by homeless people, and to hostels where people may be staying in temporary accommodation.

I’ll try to make a connection, maybe we’ll have banter so that people can have a laugh and open up, and then I can start opening the dialogue and building trust. Once we have established trust, I try and see if they have a connection to the Tower Hamlets. If they don’t, our staff at Providence Row will refer them to services within their borough but if they do I try to get them into treatment (for alcohol and substance misuse).

Treatment can involve work around mental and physical health, like having they're having their BBVs (Blood Borne Virus) checked. I also do group and individual work to help them understand why they misuse drugs and/or alcohol and support them in developing coping mechanisms.

How do you approach people who may have been homeless for years and may feel they can’t trust anyone?

I don’t invade their space and I do ask if I can sit with them. I don’t use ‘excuse me, Sir, can I speak with you.’ I’ll be myself, have a conversation and a little bit of a joke. I tell them, ‘you can tell me to go away,’ and they often do but then we have a laugh so the next time I see them the relationship has already progressed.

My approach isn’t new. I call it the mirrored approach. If someone is laid-back I engage them in a laid-back style but if they are more chaotic as in they are hard to get in contact with I will mirror that pace.

Word of mouth within the homeless community is important. Clients will vouch for you if the relationship has been positive and the basis of my job is to have positive interactions with people.

Kindness and sincerity go a long way. For example, if I see someone needs a doctor, a drink or something to eat I offer it to them.

Even when I have done my job and someone is in treatment- I stay in touch because it is an unpredictable journey that requires long-term support.

What would you say with are the dos and don’ts of outreach?

Never wake someone up. Like I said, my job is to have positive interactions with people.

Also, you have to accept you can set up everything for a client and it mightn't work. But you have to remain consistent. If I’m working with a client who misses appointments due to use, I will ask them how it felt
waking up with withdrawals. More often than not, they say ‘I wish I had gone on a script (prescription medication).’ I work with the feeling, where it is shame or regret, rather than berating them. My job is to plant seeds of change and prolong life.